More than 150,000 photos await you covering subjects related to Nature: vegetable, flowers, fruit and everything you might need to improve your company’s printed material.
Click on the key below to access the collection of photographs.

Go to the Archive

You are here: WHO WE ARE » History

Our history is also your history. 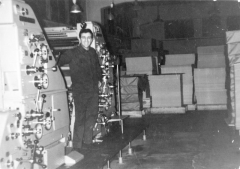 The history of the LitoBM Company started in the nineteen sixties, 1966 to be precise. The big breakthrough for the company took place seven years later in 1973 when Remo Musconi and his wife Elisa chose Calderara di Reno as the base for their business in lithography and paper industry, building an excellent reputation day after day which the company still enjoys with its customers thanks to the passion for this work shown by their children Renato, Mara and Alessandro.
Over these 50 years of work, LitoBM has acquired increasingly specialised skills in the development of specific solutions for the seed sector and horticultural, floricultural and nursery garden sector, becoming a reference point in the “Green Market” even in the international context.
The professionalism, passion for quality and respect for promises made have enabled LitoBM to achieve outstanding results and to play a distinctive role recognised in the sector in Italy and abroad.

With the acquisition of Ramberti Linea Verde in 2011, LitoBM became a leader in the sector of printing and production of packaging for the Green Market. The photographic archive was also extended by obtaining  exclusive licenses for the Nova and Globe photo libraries, two cornerstones of the sector. Thanks to this agreement the already vast archive was increased by a further 100,000 thematic photographs bringing the number in the complete collection up to more than 150,000.
In the last 10 years the company has conquered an increasingly large slice of the market thanks to the rapport with the clientele based on trust and by continually seeking perfection of the final product. The result of following this policy is that LitoBM is now one of the most important and appreciated concerns in Europe for the production of packaging for seeds.

It is a story of hard work, honesty and complete transparency as behind every product there are people with their own values and this is something we try never to forget.

Access to the Archive Registered Users
Info and Estimates

Do you have a printing project and you would like to know how much it will cost?

OUR PROFESSIONALISM and
CREATIVITY are
at your disposal.
Have a look!

Browse
Stay with us. The social network

Visit our Social Channels and become a fans.

Register to receive
our quotations
and news.

Browse through the digital catalogues, with thousands of pictures.